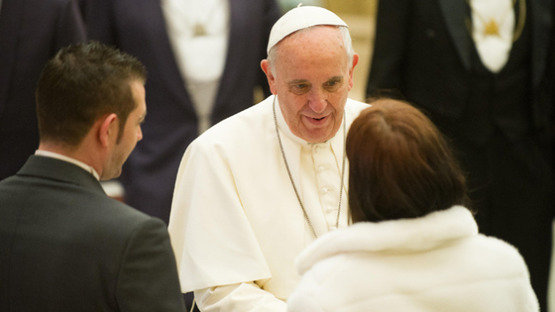 In two motu proprios, that is formal documents, signed by Pope Francis on Tuesday, September 08, 2015, the pope has expedited the process for Catholics to get annulments from their marriages in the Church.

You may wish to take some time to review with the students what it means for a Catholic marriage to be annulled.  The following information comes from Marriage and Holy Orders: Your Call to Love and Serve (Ave Maria Press, 2007:

A Catholic whose marriage has ended in divorce or a Catholic who wishes to marry a divorced non-Catholic can only do so if the prior marriage is declared null. A valid marriage requires the proper intention at the time the matrimonial consent is given. The couple must promise and intend to make their marriage both life-long and open to life. If either of these two meanings of marriage is excluded by either the man or woman on their wedding day, then no marriage has ever taken place.

A couple of points must be made here. First, this is a Church-process and has nothing to do with the legal status of a prior marriage or the legitimacy and custody of a couple’s children. Also, a ruling on the validity of the marriage only concerns the intention of one or both spouses on their wedding day. It is not concerned with the type of behavior that takes place later in the marriage.

For example, someone who marries but has no intention of being permanently faithful to his or her spouse violates the principles of fidelity and indissolubility. Evidence of this lack of intention will usually arise shortly after the wedding when the person is unfaithful to his or her partner. Or, a person of childbearing age could marry but not intend to have children. This too would render a marriage invalid.

A decree of nullity—commonly known as an annulment—is a finding by the Church that at the time vows were exchanged, at least some element of a valid marriage was lacking. Some common grounds for nullity besides the ones previously mentioned are:

Also, it’s important to remember that the annulment process is not concerned with the behavior after the wedding day. If a valid marriage was made on the day of the wedding, then that marriage is an indissoluble bond, regardless of what happened later in the marriage. A husband may cheat on his wife, but if that was not his intention on the day of the wedding that issue will not factor into a decree of nullity. Or, a woman may later decide not to have children. But if this was not her intention at the time she made her marriage vows than this too is not considered grounds for annulment.

Anyone who is divorced or considering marriage to someone who is divorced must obtain a decree of nullity in order to be married in the Church. The process begins by submitting the facts of the marriage, with supporting witness statements to the diocesan marriage tribunal. In most dioceses the facts of the marriage are collected through an interview by an advocate who will ask the details of the marriage. This information is held in confidence. The report is turned in to the marriage tribunal. The former spouse will be contacted and a list of witnesses who can testify about the marriage will be asked to provide information. After the evaluation of the facts, a judgment on the validity of the marriage is made. A second court, usually from a neighboring diocese, must verify the judgment. Whatever decision is reached, it may be appealed to the Holy See’s court for matrimonial cases.

There are also different rulings for marriages and divorces that may involve one or both spouses who are not Christian or Catholic. Marriages between two unbaptized persons in which one of the spouses refuses to live with the other spouse who has decided later to convert to Christianity can be dissolved when the baptized person enters into a marriage with another baptized person. This is called the “Pauline Privilege” because it was originally allowed by St. Paul according to 1 Corinthians 7:12–16. The “Petrine Privilege,” named for St. Peter is sometimes used to dissolve a marriage. It occurs when one spouse is a baptized Christian and the other is unbaptized and the unbaptized person refuses to live with his or her spouse after the spouse has converted to the Catholic Church.

An annulment is not a divorce. It is the Church’s declaration that a sacramental marriage never existed in the first place. When a marriage is annulled, the man and woman may enter a marriage with another person as long as the grounds for nullity from the first marriage no longer exist.

To explain Pope Francis’ rulings on annulments to your students, refer them to the article “Pope Francis Reforms Annulment Process: 9 Things to Know and Share.”