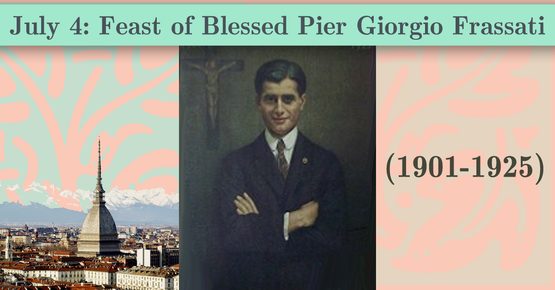 Named “the man of the eight Beatitudes” by Pope John Paul II at his beatification ceremony in Rome in 1990, Bl. Pier Giorgio Frassati was a joy-filled man who lived only to age twenty-four, but who remains a model for bountiful love and service today. Bl. Pier Giorgio’s feast day is on July 4.

St. John Paul II noted that Bl. Pier Giorgio “bears in himself the grace of the Gospel, the Good News, the joy of Salvation offered to us Christians.” His sister said of him: “He represented the finest in Christian youth: pure, happy, enthusiastic about everything that is good and beautiful.”

Pier Giorgio was born on April 6, 1901, to a wealthy and politically connected family in Turin, Italy. He was an average student but a great athlete and mountain climber. His peers adored him and called him “Terror” because of the practical jokes he played. After high school, he studied mineralogy in an engineering program. He participated in Catholic groups like the Apostleship of Prayer and the Company of the Most Blessed Sacrament. Both of these groups were known for helping poor people and for promoting Eucharistic adoration, Marian devotion, and personal chastity.

Pier Giorgio also became active in political groups—like the Young Catholic Workers, Catholic Action, and Milites Mariae—that ministered to poor people, fought fascism, and put into practice the Church’s social teachings. He gave his money to needy people and visited the sick. It was while ministering to the sick that he contracted an acute case of polio that took his life. He died at age twenty-four on July 4, 1925. Bl. Pier Giorgio offers these words of advice on how to grow in holiness:

With all the strength of my soul I urge you young people to approach the Communion table as often as you can. Feed on this bread of angels whence you will draw all the energy you need to fight inner battles. Because true happiness, dear friends, does not consist in the pleasures of the world or in earthly things, but in peace of conscience, which you have only if you are pure in heart and mind.