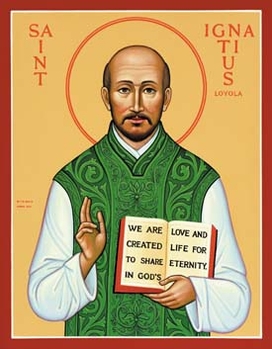 Wednesday, July 31, is the Feast Day of St. Ignatius of Loyola. The day is more significant this year because of Pope Francis, the first Jesuit pope in the history of the Church.

As Pope Francis continues his efforts to reform and renew the Church in many areas, it's important to remember that the Jesuits were essential in the reform of the Church following the Protestant Reformation.

St. Ignatius (1491-1556) was a Basque from the Pyrenees in Spain. A leg wound ended his life as a knight. During a lengthy recovery, Ignatius read about the lives of Jesus and the saints and decided to serve the Kingdom of God as his life's new work. Ignatius spent a year in prayer and medication. From his own experiences in the spiritual life, he composed the Spiritual Exercises (1523), now a classical work on spiritual life for both Jesuits and all Catholics.

During a ten-year period of schooling, largely spent at the University of Paris, Ignatius gathered around him six companions, including Blessed Peter Faber and St. Francis Xavier, who took the traditional vows of poverty, chastity, and obedience. These men also took a fourth vow—obedience to the pope as a sign of their commitment to fight against the Protestant reformers.

This vow distinguished the Jesuits from all other religious orders making them “shock troops” in the service of the Pope. Pope Paul III approved the Society in 1540, and, until his death in 1556, Ignatius served as general of the order. From his offices in Rome, he wrote more than 7,000 letters, directing the many important ministries around the world.

The Jesuits engaged in preaching, teaching, writing, and the founding of schools and colleges. They directed retreats, advised leaders, and served as confessors. They were also a vigorous missionary order which brought the faith to the New World and to the East. The greatest of all Jesuit missionaries was St. Francis Xavier (1506-1552) who preached the Gospel in India, Indonesia, and Japan.

Jesuit accomplishments in the history of the Church are many. By the time of Ignatius’s death, the Society of Jesus had over one thousand members. Vigorous men like St. Peter Canisius (1521–1597) helped the Jesuits win back many Germans, Hungarians, and Bohemians and all of Poland to Catholicism. The Jesuits founded more than eight-hundred schools by 1749. These schools swayed many to return to Catholicism and exerted a strong influence on the learned and the rich. This made the Jesuits a significant force in the politics of the day. However, in a later century (1773), their success would lead to the Bourbon kings of Spain and France conniving to get them dissolved by the Pope. The order was restored in 1814, and is today the largest religious order of men in the Catholic Church, numbering close to 20,000 companions worldwide.

Lord, I freely yield all my freedom to you.

Take my memory, my intellect, and my entire will.

You have given me anything I am or have;

I give it all back to you to stand under you will alone.

Your love and your grace are enough for me;

I shall ask for nothing more.

Prepare a report on one of the following: