Why Is the 2013 Papal Conclave Unique? | Ave Maria Press 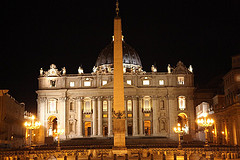 1. Pope Benedict XVI did not die. Because the pope did not die, cardinals can more freely praise and criticize his papacy because when the pope dies, most people focus on his positive qualities and contributions.

2. The cardinals do not need to focus on a leading candidate. When the cardinals began their conclave deliberations in 2005, for example, Cardinal Joseph Ratzinger (Pope Benedict XVI) was the strongest candidate though not the only candidate. This time, there are a number of possible candidates but no one who clearly stands out. This means that the cardinals may need more time to reach consensus.

3. The pope’s resignation is something new, sort of. Because of the current pope’s break with the more recent trend of remaining pope until death, the cardinals may consider another break in tradition such as looking outside the College of Cardinals for the next pope.

5. There is more preparation time this year. The cardinals this year have much more time (about a month) to prepare, to consider various candidates, and to discuss ideas among themselves than they did in 2005 when they had 16 days.

6. Alleged scandals will be closer to home. Because of some of the alleged scandals that have occurred in Europe as well as in the Vatican in the last few years, the cardinals may be more inclined to choose a pope who is unassociated with any of those issues, without sufficient time to determine which allegations are true.

7. Traditionally important cardinals will likely not be a factor. Two important figures during the sede vacante (vacant seat) are often serious candidates for the papacy. This year, one of them is 85 years old and the other is not extremely popular among the cardinals.

9. The lenten retreat may influence the conclave. Because of the timing of Pope Benedict’s resignation, the cardinal who is leading the lenten spiritual retreat this year will receive attention that he would not normally have received.

10. Social media may play a factor. The cardinals will be more aware of a number of things because of social media: ideas from the public about a new pope as well as information about their brother cardinals. They may have a bit of “information overload” as they enter the conclave.

Though there are some unique features for the conclave this year, the most important factor―the inspiration of the Holy Spirit―will still be available to and active within the College of Cardinals.

You may want to ask your students to research some of these topics further or create prayers for these cardinals as they begin their deliberations, given these factors.

(For an more about these ten factors, see this source: John L. Allen, Jr., “Conclave 2.0: Top 10 Reasons Why This Version Is Different,” National Catholic Reporter, February 22, 2013.)