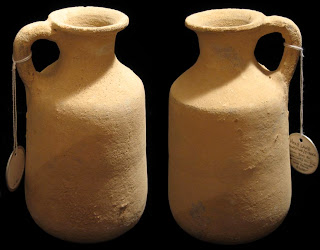 Dr. Daniel Smith Christopher, Professor of Theology at Loyola Marymount University and author of The Old Testament: Our Call to Faith and Justice is a “hands on” teacher who has envied those in the math and science fields who are able to enhance their courses with work in a “lab.” He’s proposing that teachers of religion (and the other humanities) have the same opportunities to make lab or studio sessions part of their coursework. And he’s asking for your help. Here’s a sample of Dr. Smith Christopher’s favorite Bible Lab sample with a link to two more lessons.

We hope to grow the Bible Lab with the possibility of eventually publishing a book with the best interactive ideas for teaching and learning Scripture. We are seeking out some of your best ideas with the invitation to have them sited here for many to share. If you are interested please label and e-mail them to the attention of the Bible Lab! at this special address.

Background
The most successful hands-on experiment that I have used in my freshman college courses (and with visiting high school students and in adult education settings, too) is what I call: “Dr. Moorey’s Mystery.” It is named for Dr. P.R. Moorey of Oxford University (who passed away in 2004), with whom I consulted on the original design of the this experiment when I first invented it while a graduate student at Oxford.

Preparations
You will need a total of four homemade clay pots for this experiment.

Pot 1 should be roughly made as a “pinch pot” without using a wheel. For my series, each of the pots has an obvious rim . Each of your four pots should have one obvious feature that remains constant throughout the series. This is a very significant clue, and illustrates what archeaologists look for in studying pottery styles.

The next three pots should be made on a wheel.

Pot 2 should be made with thick walls. Leave your finger impressions on the side (e.g. do not smooth the walls on the outside). Don’t forget your constant feature (like the rims on my pots).

Pot 3 should be made with thin walls, smoothed surface, and even some decorations (e.g., a design, or even simple animal figures, etc.). After this one is made and fired, take it apart from the others, find a safe place to burn some paper, and set this one pot only on the burning paper to get some black sooty markings on this pot.

Pot 4 should be very much like Pot 3, but only with smooth walls, and no designs, and no burn marks.

Next, break up (smash!) all four pots. Keep only a few pieces of the first, hand-made pot, including pieces that feature your main stylistic clue (e.g. rim, etc.). This is your “most primitive” pot, and should have fewer sample pieces than the others.

I keep all my pieces together in a box, and bring it to class on the very first day of the course, in order to have a surprising, “hands on” activity for a class that most students think is going to be bookish and slow.

I ask the entire class to stand, come forward, and draw pieces of broken pottery from the box. I then tell the entire room that there is a story in these pieces, and their task is to tell the story. Make up something fun, like, “While digging the foundation for my house, something incredible was found . . .” or “While the gardener was working in the garden by the school, he stumbled onto . . . .” I always stop, with a smile, and say, “This is not a true story.” Finish the story with: “These pieces are dying to tell you a story—your task is to give these pieces a voice! Tell their story!”

You must clarify, however, that the key to unlocking the story is that they must also seek the answer to a single critically important question that is answered with either “yes” or “no”. I inform them that they can ask any question they want at any time, but I will only answer the correct question. If the class is not moving toward this question, I give a hint – “it has to do with how they were found.” In the meantime, I tell the students to circulate around the room, collecting information about the pottery pieces.

They will make lots of good observations. Affirm the observations they make, like: “the pieces seem to come from more than one pot” and “the pieces are made from the same material” (suggests same people making them?). Eventually someone will say: “Were they all found at the same time?”  That is the question and they immediately realize that the different pots they are discerning among the mixture must represent different pots from different times.

Now have them group the pieces, and try to guess which came first, then next, and analyze why they are saying this. The key to the experiment is making sure that students are not allowed to speculate beyond reasonable inferences from the evidence.

Teaching the Lesson
The point of the lab experiment to illustrate a number of critical skills for the study of biblical texts: