With presidential politics and primaries in full swing and the feast day of   St. Elizabeth Ann Seton

, the first American born saint recently celebrated,  consider the following lesson icebreaker on the theme of the Catholic Church in America.

The focus of this lesson is the Catholic Church in the United States. Let’s find out what we already know about the topic by playing a game of “knock out.” The person in the middle chair gets a chance to knock out the competition before the round robin gets underway. All the person has to do is throw this spongy ball into the wastebasket. If it lands inside without coming out, the people in the two side chairs are out of the game and have to sit on this side (point to the elimination side) of the room. If the throw misses, the thrower is still in the game and sits with the people on this side of the room (point to the side where the classmates who are still in the game are seated). The side chair people then face off in a game of question and answer. I will ask a question related to our topic. They will confer and decide on one answer. If they are right, they get to sit with the people still in the game. If they are wrong, they are knocked out and sit on the elimination side.

Play the game. Allow the person in the middle chair to throw the ball. If the thrower misses, ask questions on American Catholicism like those on the list below. Choose new players for each round. Don’t allow a person to throw twice until everyone has had the chance to throw. Play the game until there is one champion. Move the wastebasket closer if you need to eliminate players more quickly.

Game Questions
• What American city is named for St. Francis? (San Francisco)
• Name the Franciscan missionary who founded the California missions. (Junipero Serra)
• Who was the first American bishop (John Carroll)
• What natural disaster spurred the immigration of thousands of Irish Catholics to the United States in the nineteenth century (the Potato Famine)
• Who was the first Catholic nominated for President of the United States? (Alfred E. Smith)
• Which of the following is nota Catholic college: Portland, Seton Hall, Pepperdine, or Dayton (Pepperdine)
• Who was the only Catholic President and what year was he elected? (John F. Kennedy, 1960) 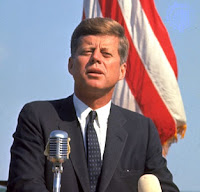 Continue with a lesson based on historical issues of American Catholicism. (See, for example, This Is Our Church, Chapter 8.) As a transition to the rest of the lesson, say:

In the game we just played, you were either in or out. In some ways, this has been the story for American Catholics. For much of the Church’s history in the United States, Catholics were an excluded group that faced prejudice and discrimination. Since about World War II, this has changed and American Catholics haven been fully assimilated into American culture and have taken their place in the mainstream. Today, however, several life issues (abortion, euthanasia, capital punishment) and other social dilemmas around secularism and consumerism have again put Catholics in debate with common American beliefs and practices and among themselves. Let’s examine in more depth how American Catholics are both in and out of the mainstream.

Additional Lessons
• Trace the family line and accomplishments of the Carroll family of Maryland, focusing on Charles, Daniel, and John Carroll.
• Examine Catholicism from the perspective of various eras of United States history (e.g., Irish immigration, Ku Klux Klan, Alfred E. Smith, John F. Kennedy, today)
• Brainstorm a list of famous contemporary Catholics. Have the student write letters to these Catholics that ask them to explain the importance of faith in their lives.
• Research the life of Dorothy Day and the Catholic Worker movement.
• Read and comment on President George Bush’s
recent trip to the Holy Land.

Note: The game of “knock out” can be used to introduce many other topics. Recreate the game using a different theme of questions (e.g., Old Testament, Sacraments, Ten Commandments).