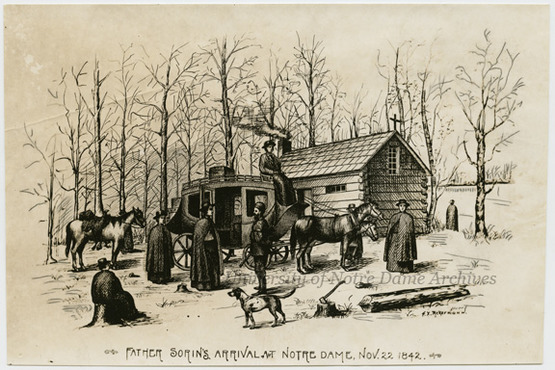 As the days and weeks of 2015 near the end, you might consider joining with the city of South Bend, Indiana, the nearby home of Ave Maria Press, on the celebration of the city's 150 year anniversary. Similarly, 2015 is the 150 year anniversary of Ave Maria Press as well. As you may know, the Press is a ministry of the Congregation of Holy Cross and is located on the campus of the University of Notre Dame.

A study using the resources cited below is significant in that it highlights the year to year development of the Congregation of Holy Cross in the United States, and particularly in South Bend. The Congregation is unique in that it was founded as a family with three parts: priests, brothers, and sisters. There remains a large presence of Holy Cross all three—priests, brothers, and sisters—in and around South Bend, and especially at three colleges: the University of Notre Dame, Holy Cross College, and Saint Mary's College.

Peruse the resources below for yourself. Then take some time to share them with your students!