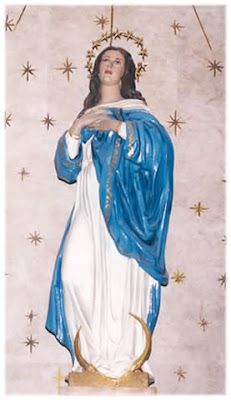 Share with your students some background on the declaration by Pope Pius IX of the Immaculate Conception of Mary, the Mother of God. The feast is celebrated on December 8.
To this day, an eyewitness account of an event that took place almost 150 years ago still circulates in Rome. It happened in St. Peter’s Bascilica, December 8, 1854, as Pope Pius IX spoke to a congregation of bishops and lay persons about the Immaculate Conception. The belief that Mary was sinless had been a long-standing tradition handed down through the ages.
Until this moment, however, it had not been an official Church teaching. Now the pope was about to proclaim it a dogma of the Church.
As the pope took up the proclamation and began to read the words, an amazing thing happened. On that dreary day in December, the sun suddenly penetrated the clouds and shone through a stained-glass window. It was precisely the right moment and just the right angle for a bright ray of sunlight to fall directly upon the pope, making him almost glow before the crowd.
Many of those who witnessed it simply to it as an interesting coincidence. Others could not help but se this stunning occurrence as God’s beautiful way of underlining a rare and important moment in the Church’s witness to truth.
The belief that Mary was always pure and perfect was a strong Church Tradition from her earliest days. A Mass to celebrate Mary’s birth on September 8 had been offered for years. This was unusual because the Church usually celebrated the death of a saint—the day a saint enters Heaven and is forever free from sin. By celebrating Mary’s birth, the Church was saying Mary was sinless from the start.
Scripture supports the Tradition. Mary was greeted by the angel Gabriel as the one who was “full of grace.” Many other places in Scripture, such as the account in Genesis 3:15 told of the Mother of the Savior who would be victorious over evil and death.
All of these elements of Tradition and Scripture went into the pope’s decision to proclaim a dogma of the Church. A dogma is a statement of belief that all Catholics are called to accept.
But there was more.
Years before the proclamation, Pope Pius IX had sent a letter to ask the bishops of the world what they, their priests, and their people believed about the Immaculate Conception. An incredible 90 percent supported the belief and wanted the pope to proclaim it a dogma. In some way, this dogma about Mary was a clear reflection of the general belief of the People of God. Thus the dogma of the Immaculate Conception became official.
But the story doesn’t even end there. It happened that four years after Pius IX proclaimed the Church’s belief in the Immaculate Conception of Mary, the miracle of Lourdes occurred. There, in a tiny French village, the Blessed Virgin Mary appeared many times to a fourteen-year-old peasant girl, Bernadette Soubirous. In one of the apparitions, Mary told Bernadette, “I am the Immaculate Conception.” When the young girl announced the Lady’s name to the local pastor he was amazed. There was no way this young girl could have know that the title for Mary unless it had been revealed to her. It was a stunning revelation to the Church that Mary herself confirmed the dogma.
Never in the history of the Church had a teaching of faith received such obvious backing from Heaven itself.
Discussion Questions