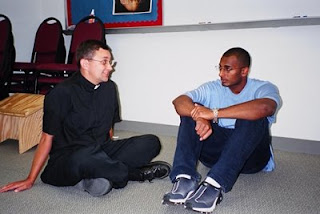 Your students are at an age when their planning for college, choosing a college major, and considering possible careers is also influenced by callings to specify a Christian vocation. Narrowing this task to the point of eventually making a decision involves their asking themselves several questions, listed below with accompanying statistics (all included in Marriage and Holy Orders: Your Call to Love and Serve.

Will you be married?
• Marriage is the most “popular” vocation in numbers. Nearly 55 percent of adults over the age of fifteen years old are married.

Will you be a lifelong single person?
• The percentage of never married persons aged 25 to 35 has increased by 20 percent in the past 30 years, suggesting more lifelong singlehood.

Will you choose a religious vocation as a sister or brother?
• Religious vocations have risen in some developing countries recently. However, in the 40 years from 1965–2005, the number of religious sisters decreased in the United States from 179,954 to 68,634, the number of religious brothers from 12,271 to 5,451. Opportunities for a life of radical service, discipleship, and excitement remain available for those men and women willing to take the plunge into religious life.

If you are a male, will you pursue a calling to the ordained priesthood?
• The total number of priests in the United States has also decreased since 1965. By 1998, 24 percent of diocesan priests were over 70 years od, the retirement age for priests. There is certainly a need for men to consider prayerfully a vocation to the priesthood.

Devoting a life to any of these Christian vocations requires many choices—both prior to the initial commitment and through the challenges of living out the vocation. Think about some of the questions that are likely to arise for the various vocations:
• Whom will I marry?
• What type of parent will I be?
• Who will take care of my parents when they are older?
• How will I get along with others in a religious community?
• Will I be able to keep a vow of celibacy?
• Will I be accepted into a seminary to study for priesthood?

Though the median age is getting older for commitment to each of these vocations (e.g., 27 for males and 25 for females getting married for the first time), the likelihood is that in the next ten years you will have made a commitment to pursue one of the particular Christian vocations described above. There is also a chance you could already be married, a parent, a professed religious, or a priest before the age of 30.

Charting any of these life courses can bring feelings of anxiousness, anticipation, excitement, and more. But any undue concern about your future should be eliminated when you come to an understanding that God is in control of your life and that God only wants the best for you.

As the Catechism teaches, “Creation has its own goodness and proper perfection, but it did not spring forth complete from the hands of the Creator” (CCC, 302). Instead, the universe, including each person, is created by God “in a state of journeying” toward an ultimate perfection that hasn’t yet been reached. The ways that God guides his creation towards perfection is known as divine providence.

It is comforting to know that God loves and cares for us so much that he has a special plan for our lives and guides us to it. As the book of Proverbs teaches:

Many are the plans in a man’s heart,
but it is the decision of the Lord that endures (Prv 19:21).

Assignment
Read the call of Moses (Ex 3:1-4:17) and the call of Mary (Lk 1:26-38) and identify four characteristics common to any vocation in these biblical examples:
called for a special purpose
the presence of a special gift
the name of the caller
the life of sacrifice, faith, and often darkness that follows