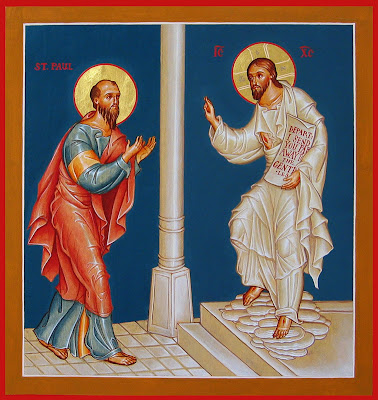 To help mark the Year of St. Paul, help your students learn more about the life and ministry of St. Paul by performing pantomimes on key Scripture scenes. Divide the class into small groups. Tell the groups to read together their suggested Scripture passage and then choose roles for their pantomime. Remind them that to pantomime a scene means to act it out without speaking. Everyone in the group should have a role. Listed below are the six scenes and notes for direction

Characters: Choose one person to be Stephen. The others are his persecutors. One of the persecutors is Saul.

Pantomime: The persecutors visibly grind their teeth in anger against Stephen. Stephen looks to Heaven as if entranced by a vision. The persecutors cover their ears, rush towards him, and throw him down. They start to throw stones (wadded up paper) at him but their burdensome coats prevent good throws. The persecutors take off their coats (sweaters, jackets) and lay them at the feet of Saul. Then they continue their throws. Stephen kneels in prayer as if crying out to God for help before collapsing in death.

Characters: Saul, high priest, Ananias, a minister of Baptism, and the traveling companions of Saul. One person can hold the flashlight to represent the vision Saul had of Jesus.

Pantomime: The high priest sends Saul on his way to persecute Christians. Saul and traveling companions march in single file on stage. The light from the flashlight blinds Saul and he falls to the ground. The traveling companions stand around him with their hands over their mouths, as if speechless. Saul gets up, acting blind, and is led by his companions to a corner of the stage. In a separate corner of the stage, Ananias lays on the ground as if sleeping. The person holding the flashlight shines it in Ananias’s eyes, waking him up. Ananias tosses and turns before proceeding to the area where Saul is. Ananias puts his hands on Saul’s forehead and immediately Saul can see. Ananias leads Saul to the minister of Baptism, who dips Saul backwards three times as if being immersed in water.

Pantomime: Depict enemies of Saul guarding the front of the stage to represent their guarding of the gates of Jerusalem. Show the disciples who help Saul boosting him on one person’s back (like leap frog) as Saul sneaks quietly to the rear of the stage out of sight of the enemies. Saul creeps to a meeting with the disciples who are afraid. He offers a warm greeting, but they cringes at meeting with him. Barnabas puts his arm around Saul and shares positive testimony about Saul to those who are afraid. Saul and all of the disciples then move freely around the stage, as if preaching the Good News. Saul stops to debate again with some of the enemies.

Pantomime: The scene is meant to represent a main occurrence in all of Paul’s missionary efforts. It explains how Paul became known as the Apostles to the Gentiles. Depict Jewish people at prayer in a synagogue. Paul and Barnabas enter their space and visibly exhort the Good News about Jesus. The Jewish people ask them to leave. Paul and Barnabas then encounter Gentiles (depict doing common activities like tossing a ball or selling merchandise) on a “street corner.” Paul and Barnabas find that the Gentiles are very attentive listeners of the Good News.

Pantomime: Paul and Silas walk around the stage with hands extended, pausing occasionally as if preaching the Good News. All the while the fortune-teller and her slave owners follows the two. Depict her as if she is rubbing a crystal ball. Suddenly, Paul turns around and the fortune-teller kneels. Paul waves his hands over her to remove her evil spirit. The fortune-teller runs off praising God. The slave owners complain to the Roman authorities about what has happened. The Roman authorities take Paul and Silas by the arms and throw them in jail (perhaps behind a chair or desk). Jailer pace back and forth guarding Paul and Silas. Simulate an earthquake by shaking your arms and legs and moving the chair or desk away from Paul and Silas. The jailers flee but Paul and Silas do not leave the jail area. The flashlight holder shines the light in the eyes of the jailer. Paul and Silas begin to preach the Good News (hold up Bibles) to the jailers who have returned. The jailers act as if they are opening a cell with a key and release Paul and Silas.

Pantomime: Depict Paul and other prisoners as if on a boat with one sailor in front. Chairs could be set up in rows two across to represent the boat. Simulate a storm and a shipwreck (chairs falling over). Skip to a scene in Rome where Paul is led by jailers into a jail cell. Paul can move as if hand and legs are loosely shackled. Show jailer allowing Paul to leave “cell,” move freely around the stage (though still shackled), and preaching the Good News to the citizens of Rome.

After the students have had a chance to practice, announce each scene. Have the students do the pantomime. Then have them read or paraphrase the Scripture passage they were depicting.