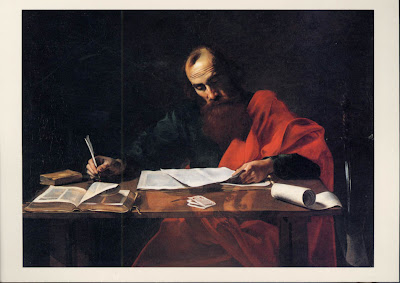 Assign an exercise asking the students to explain a teaching about God, Jesus or the Church (e.g., the Blessed Trinity, Incarnation, or that the Church is the Body of Christ) using the style of writing used by St. Paul in his Epistles. Their letters should include:

Opening. Since there were no envelopes in Paul’s time, the name of the author and the person for whom the letter was intended were included in the letter itself. Paul also identifies any co-senders in the opening. These were usually fellow Christian missionaries. Paul greets his readers with “grace and peace,” combining both the Greek (“grace”) and Hebrew (“peace”) forms. Have the students read 1 Corinthians 1:1-3 and identify the parts of the opening that you identified.

Thanksgiving. In Hellenistic-style letters, the opening was usually followed by a prayer. Paul follows this format, usually stating the main theme of the letter. He may pray for their well being for the future and praise them for their growth in faith since he last visited with them. Have the students read Romans 1:8-15 as an example. Paul does not include the thanksgiving in two of his letters, Galatians and Timothy. Read Galatians 1:1-10. Then ask the students why they think that Paul skipped the thanksgiving in this letter.The thanksgiving blessing was likely left out because Paul was upset with the Galatians who had been enticed by other missionaries to include observance of Jewish law in Christian living.

Body. The body, or main part of Paul’s letters, is divided into two main sections. The first covers the doctrinal teachings Paul wishes expressed. In the second part, Paul offers encouragement for Christian living based on the teachings. The general principles in the Christian living sections are still used today as the basis for Christian morality. Show places where there is a natural division between the two sections; for example, Romans 12:1 or Galatians 5.

Conclusion. The final words in Paul’s letters usually include some personal news about him or greetings to specific people in the community. Sometimes Paul includes a note that the conclusion was written “in my own hand,” indicating that the rest of the letter was dictated to a scribe. He would write the conclusion in his own hand and sign his name to assure the letter’s legitimacy. Have the students look up and read 1 Corinthians 16:13-24 as an example of a conclusion.

After the students finish writing their letters, have them exchange them with a partner and read what the other person has written. Call on one or two volunteers to read their papers in front of the entire class.