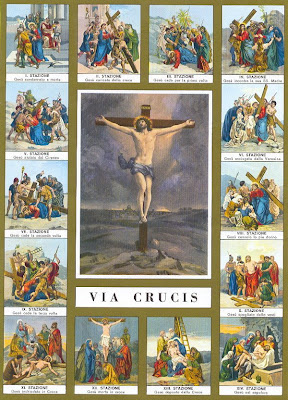 For centuries, Christians have imitated the last painful journey of Jesus, his “Way of the Cross”. It seemed to be a natural devotion for “followers of Jesus” to imagine themselves following his footsteps on the agonizing journey to Golgatha, the rocky hill outside of Jerusalem where Jesus was crucified and died.

Although the Stations of the Cross has diminished as a devotion in recent decades, it remains a Lenten practice that many people still find very meaningful and powerful. In 1991, this practice was given new life by Pope John Paul II. It is becoming more popular again. The pope revived the Biblical or Scriptural Stations of the Cross and suggested that the Church follow this set of stations since they are rooted in the four Gospels. Each year, the pope prays the stations in the Coliseum in Rome. In Jerusalem, thousands of Christians follow the original Stations or Way of the Cross through the Old City. The path Jesus followed is called “The Via Dolorosa” or the “Way of Sorrows.”

A different set of stations, the Traditional Stations or the Traditional Way of the Cross may be familiar to your students. It is these station scenes – and not the Biblical Stations scenes – that can be found in most churches and at outdoor stations.

The Traditional set depicts apocryphal scenes, events not described in any of the Gospels. Among these scenes are the three falls of Jesus, his encounter with a woman named Veronica, and his agonizing meeting with his mother Mary.

The Traditional Way of the Cross presents the following stations:


The Biblical Way of the Cross presents the following stations:

Consider involving students in the creation of their own Way of the Cross. Then, finish Holy Week with a prayer service for your own class with their own unique interpretation of an ancient devotion.

Lesson Plan
1. Give students a brief 15-minute summary of the history and evolution of this Lenten devotion.  An excellent resource is the Vatican website.

2.  Distribute copies of the Biblical Way of the Cross stations with the Scripture references. Hand out Bibles as well to all the students. Divide the class into seven groups. Assign two stations to each group.  The groups should read the Scripture references for their stations and write short (50-to-80 word) meditations for each station. Encourage students to let their own “voices” as 21st-century American teens shape their meditations.

3.  Collect the station meditations and have a small group of students editors combine them and add a brief introduction. Duplicate this Way of the Cross for all. Recruit a second small group to create a PowerPoint presentation of meditative art and music for your own class Biblical Way of the Cross prayer service.