Who Are the Children at the United States/Mexico Border? | Ave Maria Press 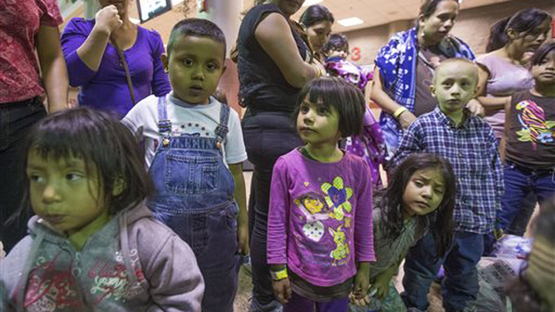 The media has been buzzing with information about young people crossing the border in Texas primarily and in Arizona. There is much political dialogue about what to do and of course, who is to blame.

Here are some basic points for information and clarification:

1. Children are seeking only to immigrate to the United States.

In addition to the United States, children are seeking asylum in Mexico, Costa Rica, Panama, and Belize according to the United Nations High Commissioner for Refugees. (USA Today)

2. Parents send their children to the United States by themselves.

A good percentage of the children who are coming to the United States for asylum already have family, often parents, in the U.S. who immigrated years ago when the U.S. had more lenient policies for immigrants from their countries. The children have not seen their loved ones in years.

3. Children want to come to this country for better opportunities.

The Department for Homeland Security has analyzed the reasons why children have been making the journey to the US. While Guatemalan children from rural areas may be seeking economic opportunities, most Honduran and Salvadoran children come from such violent regions in their countries (as well as poverty) that they think that they are less likely to die on the dangerous route to the U.S., even by themselves.

Gang violence is out of control in Honduras, El Salvador, and urban Guatemala. Young children encounter gangs at school and the neighborhood and even those kids who are completely uninterested in these groups are exhorted and threatened. Sixty percent of the children who arrive at the border have been beaten, robbed, or threatened by gang members. Thirty percent of the girls have experienced threats of sexual violence or actual experiences of that violence, including rape. The homicide rate in Honduras is the highest in the world for countries who are not at war.

4. Nobody but politicians are saying much less doing anything about this.

The United States government is working with the governments of the Central American countries to counter the message promoted by human smugglers that minors arriving at the U.S. border will be able to stay. The Mexican government discourages people from traveling through Mexico to the border because migrants are often victims of violent crimes such as kidnapping, robbery, and rape, as well as victims to the harsh weather conditions .Bishops from the Central American countries as well as this country have committed themselves to keeping migrants as safe as possible and to support efforts in their countries of origin to discourage young people from leaving. The chairman of the U.S. bishops’ committee on migration has called people to think of solidarity at a global level. The Pope has asked that the children be welcomed and protected and that people deal with their fear and the indifference of a “throwaway culture”

To study the Migration issue in more depth, please see the Ave Maria Press free mini-unit on the subject. It accompanies the video Dying to Live: A Migrant's Journey.

Department for Homeland Security, Map of “Unaccompanied Alien Children (UACs) by Location of Origin for CY 2014: Honduras, El Salvador, and Guatemala,” 27 May 2014.