Words from St. Thèrése of Lisieux at the Time of Her Death | Ave Maria Press

October 1 is the Feast Day of St. Thèrése of Lisieux, the patroness of justice.

In July 1897, Thèrése was brought to the convent infirmary. She was hemorrhaging continually. At the end of the month she was anointed and in the middle of August received Holy Communion for the last time. Her last agony was frightening.

She had a presentiment that her activity after death would extend far beyond the influence of her life. “How unhappy I shall be in Heaven,” she said, “if I cannot do little favors on earth for those whom I love.”

She indicated that with her death her mission would be about to begin: “My mission of making God loved as I love him, to give my little way to souls. If God answers my request, my Heaven will be spent on earth up until the end of the world. Yes, I want to spend my Heaven in doing good upon earth.”

Her illness reached a horrible climax between August 22 and August 27. The tuberculosis had attacked not only her lungs but had infected her whole body. Thèrése suffered violently with each breath she tool. She cried out from the pain. “What a grace to have faith,” she remarked. “If I did not have any faith, I would have inflicted death on myself without a moment’s hesitation.”

Somehow she survived this terrible time and lasted several more weeks. She retained her sense of humor and gaiety. And yet, she remarked to her sister Pauline that the terrible interior trial of darkness continued. She complained: “Must one love God and the Blessed Virgin so much, and still have thoughts like this?” She saw a black hole in the garden and advised Pauline: “I’m in a hole just like that, soul and body. Ah, yes, what darkness. However, I am at peace.”

The end came on September 30. Pauline related: “I was all alone with her when, about 4:30 PM, I guessed by her sudden pallor that her end was approaching. Mother Prioress returned, and very soon the community was reassembled around her bed. She smiled at the sisters, but did not speak until the moment of death . . . it was becoming increasingly difficult for her to breathe, and she uttered involuntary cries when trying to catch her breath.”

Thèrése implored the prioress: “Mother! Isn’t it the agony? Am I not going to die?”

“Yes, poor child, it is the agony,” Mother Prioress replied, “but God wills perhaps to prolong it for several hours.”

Thèrése was holding a crucifix in her hand. Gazing at it, she said, “Oh! I love him.” A moment later, “My God, I love you.”

Bystanders maintained that her face took on again the appearance it had when she was in full health. She closed her eyes and expired.  It was 7:20 PM. She had written a few months before her death to a missionary who expressed anxiety about her illness: “I am not dying I am entering into life.” 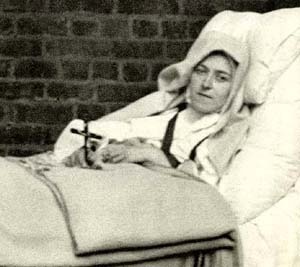