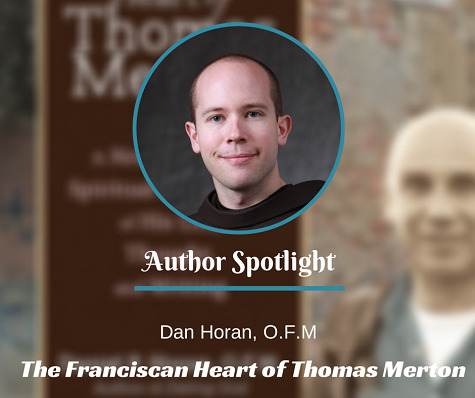 Not many people realize that one of the most influential spiritual writers of the twentieth century, Thomas Merton, was deeply influenced by Franciscan spirituality even though he was a Trappist Monk. Dan Horan, O.F.M., both a Franciscan Friar and expert in Thomas Merton, shows us why this was the case and gives us a unique insight into Merton's life and work in The Franciscan Heart of Thomas Merton.

We caught up with Horan amid a very busy speaking schedule to ask a few questions about his newest book.

Ave Maria Press: You have the unique perspective of being both a Franciscan friar and an expert in the life and work of Thomas Merton. What was it in your life that attracted you to both?

Dan Horan: I came really to know both Thomas Merton and the Franciscan intellectual and spiritual tradition while a student at St. Bonaventure University. It’s an interesting biographical overlap with Merton’s own story because it was also at St. Bonaventure, when he taught in the English department in 1940-1941, that he came to study the Franciscan tradition in depth.

There was always something about Merton’s honesty and humanity that attracted me to his writings and insight. Likewise, both St. Francis and the tradition that bears his name are approachable and down-to-earth models for authentic human living. Neither Merton nor the Franciscan tradition gets old for me and I’m continually learning something new along the way of my own spiritual and intellectual journey.

Ave Maria Press: Some readers of Merton books may not know the story of Thomas Merton and his early association with the Franciscans. Can you explain briefly where his Franciscan roots originated?

Dan Horan: Sure. Merton’s connection to the Franciscan tradition really began with his reading of Etienne Gilson’s book The Spirit of Medieval Philosophy in which the philosopher introduces his readers to some of the great Medieval Franciscan theologians and philosophers. Merton credited his reading of that book to changing his outlook on Catholicism in general and shortly afterward he sought baptism in the Catholic Church.

Merton then discerned a call to religious life and sought the guidance of his Columbia University mentor, Dan Walsh, who said that Merton had a true “Franciscan spirit” and he should consider joining them. At that point, he sought to enter the Franciscan friars (in fact, the very same province that I belong to headquartered in New York City) and was accepted.

There are a number of complex factors that came together and led to Merton’s eventual withdrawal from the Friars (I talk about all of this in Chapter Three of the book) and he then accepted a job teaching English at St. Bonaventure University, a Franciscan college. It was there that he actually became a Franciscan as a Third Order member, studied the Franciscan theological and philosophical sources with some of the greatest scholars of the twentieth century, and befriended a number of friars who helped guide the young Merton to his ultimate vocation as a Trappist Monk.

Most people think that the Franciscan influence stops there, but Merton’s writing and reflection continued to be shaped and informed by the Franciscan tradition throughout his whole life.  Though he was indeed a true monk, he also had a special place in his heart for the Franciscan heritage and worldview.

Ave Maria Press: Thomas Merton is known for his insight into the “True Self.” In your book you trace this concept back to a Franciscan perspective. Can you explain the connection there?

Dan Horan: The origin of and the theological foundation for Merton’s notion of the “True Self” can be traced back to the original work of a medieval Franciscan friar named John Duns Scotus. Scotus argued that what makes something a particular or individual thing was not external or extrinsic to that thing (as many other theories held), but that everything is particularly loved into existence by God with a unique, inalienable, and unrepeatable identity that is really identical with a thing’s very existence.

This “principle of individuation” (the technical term) of Scotus is called haecceitas in Latin (meaning “this-ness”), which Merton refers to during his studies of the tradition and around the time he begins working on what will become his book New Seeds of Contemplation in which the “True Self” concept first appears.

In a 1946 letter to Mark Van Doren, a former professor of his, Merton expresses his enthusiasm for the work of Scotus and mentions he wants to write a book on Scotus’s thought. Merton scholars believe that what became New Seeds was in fact that same book. Throughout New Seeds the insights of Scotus are found everywhere, but especially in the sections on the “True Self” and in Merton’s reflections on the Incarnation.

Dan Horan: Well, Merton himself actually credits Francis of Assisi with being perhaps the greatest example of someone engaged in Christian interreligious dialogue. At other point in his writing, Merton points to Francis and the encounter the medieval saint had with Sultan Malek al-Kamil in 1219 in Damietta, Egypt, during the height of the Fifth Crusade as a model for engaging non-Christians today. This is further emphasized by Merton in his writings about Pope John XXIII’s encyclical Pacem in Terris (1963). Aside from the many explicit ways Merton names Francis as a model, I think the way in which Merton engaged with Muslims and Buddhists, in addition to those of other religious traditions, bears a stark resemblance to the way Francis went about interacting with women and men of other traditions in his own time.  Both Francis and Merton were way ahead of their times in their respective historical contexts.

Ave Maria Press: If there was just one lesson from the writings of Thomas Merton that every Catholic should know, what would it be?

Dan Horan: That is a difficult question to answer because Merton has so much insight and wisdom for every Catholic. I still believe that Merton’s writing on the “True Self” is very important for women and men today to hear and understand. The way Merton popularizes Scotus’s deeply insightful notion of how God loves all of creation into existence and knows and holds each person’s truest identity says a lot about the dignity of each and every human person in a world that is quick to evaluate people based on external appearances, wealth, status, and the like.  What the “True Self” also reminds us of is the absolute need we have to work on our relationship with God, because Merton affirms that it is only in finding God that we are able to find our true selves.

Thank you, Dan, for sharing these additional insights with us and for offering such a unique perspective on the life and work of Thomas Merton.