Former Notre Dame basketball coach Muffet McGraw will sign copies of her new book, Expect More! Dare to Stand Up and Stand Out: A Guide for Women on Reaching Their Pot 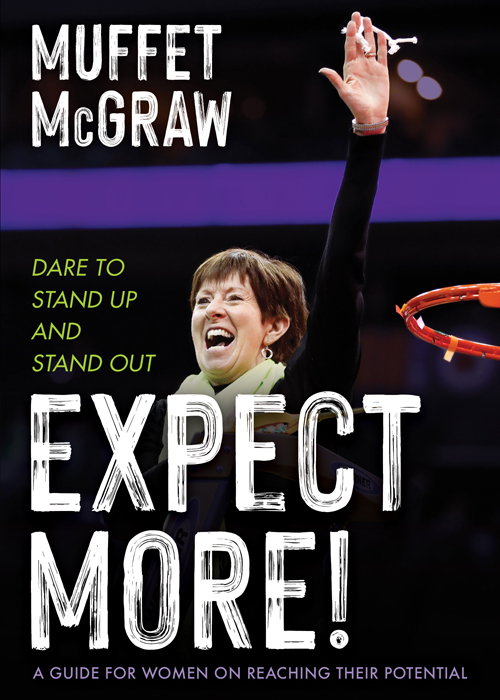 McGraw retired in 2020 after thirty-three years as head coach of the University of Notre Dame women’s basketball team. She ranks first on the all-time wins list among single-sport coaches in the history of Notre Dame athletics. With an overall record of 936-293, she led the Irish to two national championships (2001, 2018). McGraw’s teams appeared in twenty-six NCAA tournaments, including seventeen Sweet Sixteens, nine Final Fours, and seven championship games. She was inducted into the Naismith Memorial Basketball Hall of Fame in 2017.

She wasn’t just talking about basketball.

In Expect More!, McGraw shares a bold message: It’s time for women to take a rightful and fair place in positions of leadership. In order to do that, she says, women should approach every opportunity not only with confidence but also with swagger.

Anyone who wears a Notre Dame Women’s Basketball lime green shirt, a Girls on the Run shirt, or completes the following phrase “Girls on the Run is so much __?” will be entered into a drawing for a special prize. Two winners will be randomly selected.

Masks are required and no photo opportunities will be available with McGraw. Please remain in your car during the event.

During the socially distanced book signing, copies of McGraw’s hardcover book will be available for $15, with $5 of each book going to Girls on the Run Michiana. Ave Maria Press will accept cash, Visa, Mastercard, Venmo, and PayPal on site. You may also order a signed copy online with the code IRISH at avemariapress.com through March 27.