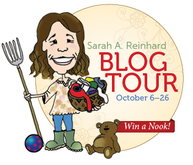 Sarah A. Reinhard, popular Catholic blogger and speaker, will begin her blog tour on Saturday, October 6th, as part of the launch of her newest book, A Catholic Mother’s Companion to Pregnancy. Reinhard’s fans and friends are invited to follow her virtual travels as she offers guest posts on each of the twenty mysteries of the Rosary. There will be a link in each post guiding readers to a page where they can enter to win a FREE Nook HD Tablet e-reader.

October 6th: The Annunciation on The Anchoress by Elizabeth Scalia

October 7th: The Visitation on Of Sound Mind and Spirit by Shelly Kelly

October 8th: The Nativity on Riparians at the Gate by Jen Fitz

October 9th: The Presentation on Happy Catholic by Julie Davis

October 10th: The Finding of Jesus in the Temple on Random Acts of Momness by Ginny Moyer

October 11th: The Baptism of Our Lord on Mommy Marginalia by Victoria Watkins

October 12th: The Wedding at Cana on The Practicing Catholic by Lisa Schmidt

October 13th: The Proclamation of the Kingdom on Shoved to Them by Rebecca Frech

October 14th: The Transfiguration on Plot Line and Sinker by Ellen Gable Hrkach

October 15th: The Institution of the Eucharist on Rosetta Stone by Michelle Reitemeyer

October 16th: The Agony in the Garden on The Kennedy Adventures by Dianna Kennedy

October 17th: The Scourging at the Pillar on Franciscan Mom by Barb Szyszkiewicz

October 18th: The Crowning of Thorns on Happy Little Homemaker by Jen Steed

October 20th: The Crucifixion on This Little Light by Michelle Colasante

October 22nd: The Ascension on Catholic Drinkie by Sarah Vabulas

October 24th: The Assumption on Scrutinies by Dorian Speed

October 25th: The Coronation of the Blessed Virgin Mary on The Wine Dark Sea by Melanie Betanelli