Celebrate the Feast of the Ascension | Ave Maria Press 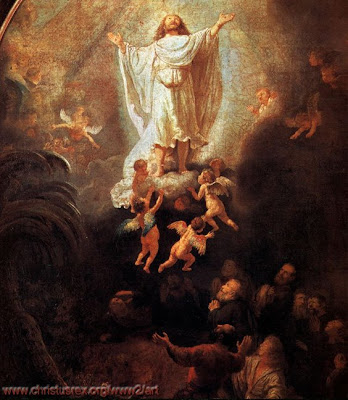 At certain churches and in other times, the Ascension Thursday liturgy includes a procession outside of the church to a nearby hill to remind everyone that Jesus was lifted up to the sky. Also, later, the Easter candle was extinguished on Ascension Thursday to mark the end of the East season and the beginning of the nine-day wait until Pentecost.

This coming Thursday marks the day the Church remembers Jesus' Ascension, though the coming Sunday liturgy will also recall the event. Christians live in Jesus' promise that he will come again like a “thief in the night” when we least expect it. Ascenion Thursday is alo a preview of our own destiny in which we will someday be taken up to heaven to meet God face to face.

Activities
With your class, release helium-filled balloons out of doors. Arrange for each student to tie a samped postcard to the balloon with a Scripture passage that speaks of Jesus' Ascension. The postcard should be addressed for return mail. Have a contest to see which student's balloon travels the farthest based on the postmark on the postcard.

Process to the highest point on the school grounds or neighborhood (the top floor or the building or a neigbhoring bluff or hill). When you arrive, read or have the students enact the Ascension story. Offer spontaneous prayers for personal and communal readiness for the Second Coming.

Lesson
Compare the versions of the Ascensnion from Acts 1:9-11 and Luke 24:50-53, and Mark 16:19. Also note the similar prologues of Acts and Luke, including the literary device of addressing the writing to a named person (Theophilus).

Ask: “If Jesus were to return to earth within one hour, what would you do to prepare for his arrival?”