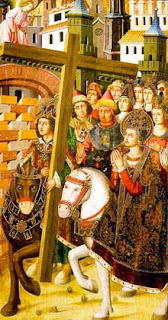 The beatification of Holy Cross Father Basil A. Moreau this week coincides with the Feast of the Holy Cross on September 14.

It is believed that the Feast of the Holy Cross has its origins to the year 355 when the Emperor Constantine dedicated the Church of the Holy Sepulcher over the site at Golgotha where Jesus died. Reportedly, Constantine’s mother, St. Helena, had traveled to Golgotha and found not only Christ’s cross, but those of the two thieves crucified next to him. The three crosses were then taken to the house of a dying woman where the true cross of Christ restored her to health.

By 346 the relics of the cross discovered by St. Helena were on their way to different parts of the world. Part of the cross was placed in a statue of Constantine in the newly built city of Constantinople. More of the cross was subdivided and placed in church altars. (It used to be required that each altar have a holy relic, for example, the bones of a saint of martyr. Nowadays this is not a requirement as altars are seen to be dedicated to God alone. However, many church altars still have relics.) Crucifixion by cross was more violent than any form of capital punishment our society uses today.

Actually, at the time of Jesus, the Romans had two forms of crucifixion. Roman citizens were beheaded. Foreigners like Jesus were forced to carry a single crossbeam outside the walls of the city to a place called Golgotha (Skull Place) where the upright posts remained permanently fixed. Many times the weight of the crossbeam would kill the person; in Jesus’ case he was so weakened by the beatings and abuse he had absorbed that another man, Simon of Cyrene, was permitted to help him carry it.

Once hung or tied on the cross, Roman soldiers would often break the legs of the condemned. This did not happen to Jesus. Sometimes a soldier would lance the person’s side to hasten death. In Jesus’ case, when his side was lanced—and water flowed out with blood—he was already dead.

Only John’s Gospel mentions that Jesus was nailed to the cross. This practice, too, is confirmed by archaeological finds. It seems the Romans had refined this torture so that the cross included a small seat, called the seidle, where the accused could support just one buttock while spikes were driven through his hands and feet. The torture was unbearable. Besides the obvious pain, insects were attracted to the open wounds, and Jesus would have been unable to shoo them away.

The cross is a great paradox, or contradiction, because out of this misery of death is new life for all who are baptized and believe in Christ. As St. Paul wrote: “The message of the cross is foolishness to those who are perishing, but to us who are being saved it is the power of God.” (1 Cor 1:18)