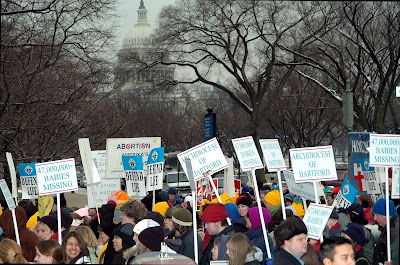 Today, on the 36th Anniversary of the Roe v. Wade Supreme Court decision legalizing abortion in the United States, take some time to pray with your students for the rights of the unborn, a change of laws, and a change of heart. Review the issue beginning with a summary prepared by the United States Catholic Bishops. Recent survey polling data of U.S. citizen’s beliefs and attitudes about abortion is also provided.

You may wish to have your students prepare reports on the proposed Freedom of Choice Act that among other things would require taxpayers to fund abortions as well as endangering the moral stance of Catholic hospitals with the possibility that they would be required to perform abortions.

With a change in presidental administration this week, the National Right to Life Committee prepared a summary of President Obama’s agenda on these issues and suggestions for course of action.

Our Lady of Guadalupe,
we turn to you who are the protectress of unborn children and ask that you intercede for us,
so that we may more firmly resolve to join you in protecting all human life.

Let our prayers be united to your perpetual motherly intercession on behalf of those whose lives are threatened,
be they in the womb of their mother, on the bed of infirmity, or in the latter years of their life.

May our prayers also be coupled with peaceful action which witnesses to the goodness and dignity of all human life,
so that our firmness of purpose may give courage to those who are fearful and bring light to those who are blinded by sin.

Encourage those who will be involved in the March for Life;
help them to walk closely with God and to give voice to the cry of the oppressed,
in order to remind out nation of its commitment to life, liberty, and the pursuit of happiness for all people.

O Virgin Mother of God, present our petitions to your Son and ask Him to bless us with abundant life.